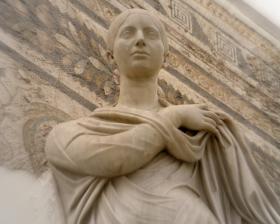 Founded in Sassari in February 2016, SAIC serves as an antenna for the Italian scientific community interested in ancient Mediterranean civilizations, historical, archaeological and antiquity sciences, art history, conservation , enhancement and restoration of cultural heritage. This scientific society aims to foster coordination between cooperation initiatives, support research, training and dissemination of knowledge, actively contribute to intercultural and development policies in Tunisia and more generally in the Maghreb countries.

It is engaged in the field of international cooperation with a number of initiatives, such as the publication of the Open Access Cartagine Studi e Ricerche (CaSteR) journal: http://ojs.unica.it/index.php/caster; the publication of the series "the monographs of SAIC," first issue being released in 2017 and edited by Paola Ruggeri, focused of the archaeology and the preservation of Carthage: State of the art and prospects for cooperation between Tunisia and Italy; the issue, in collaboration with the Agence de Mise en Valeur du Patrimoine et de Promotion Culturelle de Tunis (AMVPPC),  edited by Samir Aounallah and Attilio Mastino followed the publication of Un monument, un Musée. Je suis Bardo, presented in Tunis in March 2016.

The inauguration on 17 March 2017 of SAIC's new head-quarters in Tunis at the AMVPPC allowed to establish in the same premises, the "Sabatino Moscati" library, including over 6,000 volumes dedicated to archeology, art history, science of antiquity and the technologies applied to cultural heritage, donated by the Moscati family and transferred to Tunis by SAIC. The Moscati library will be inaugurated, in agreement with the famous scholar's heirs, on 6 October 2017 at 11 am. Two librarians and a student of the Oristano Nesiotikà Specialization School will work in it starting on 25 September 2017 in collaboration with the AMVPPC staff.